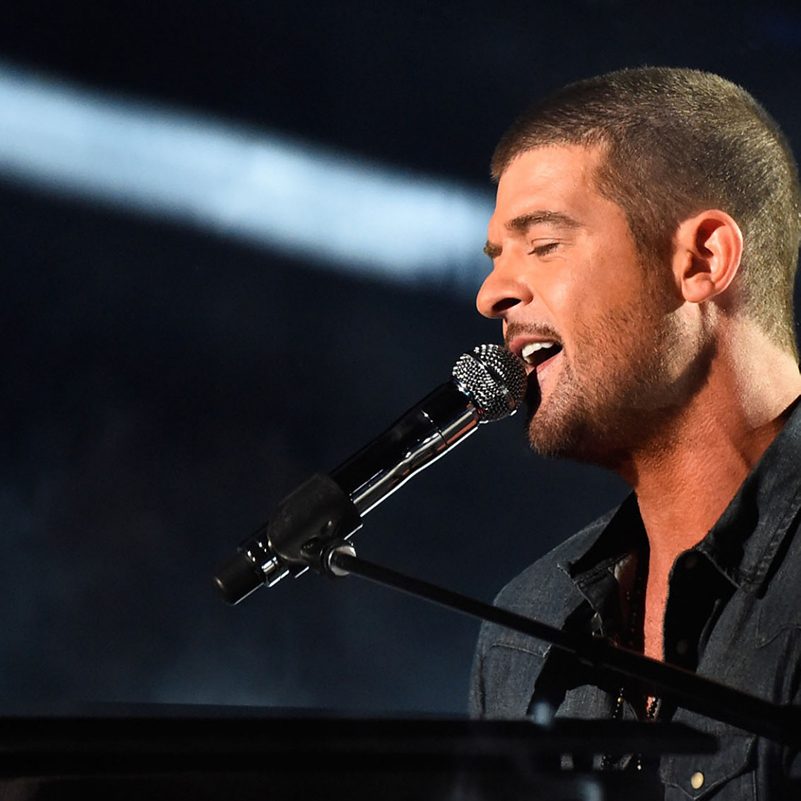 One of the more charismatic and commercially successful R&B acts of the past twenty years, Robin Thicke didn’t have the toughest journey achieve stardom, but he was one of the least likely artists to acquire street credibility. He worked for over a decade as a modestly successful songwriter and fledgling solo artist prior to breaking through – assisted by the Neptunes – with 2006’s The Evolution of Robin Thicke. On that album, his inspirations, ranging from ’70s Marvin Gaye to Philly soul to classic Brazilian music, vividly coalesced with his somewhat brash personality and remarkable vocal skill.

It was the first of several Top Ten R&B albums in a career that involved symbiotic collaborations with long-term associates such as Pharrell and Lil’ Wayne. Thicke experienced his earliest success as a songwriter. Before the end of 2000, he either wrote or co-wrote songs for Brandy (“Love Is on My Side”), Christina Aguilera (“When You Put Your Hands on Me”), and Marc Anthony (“When I Dream at Night”).

Thicke’s second album, “The Evolution of Robin Thicke”, didn’t arrive until October 2006, but it benefited from a new alliance with the Neptunes. Thicke scored a number one R&B single with the ballad “Lost Without U,” and the album eventually went platinum. Thicke’s fifth studio album, Love After War, was his most swashbuckling release to date, issued in December 2011.

He made a surprising crossover move in March 2013 with the lighthearted, off-the-cuff “Blurred Lines,” a Pharrell production with instrumental cues taken from Marvin Gaye’s “Got to Give It Up.” It topped the Hot 100, and the album, also titled Blurred Lines; it topped the Billboard 200 and sold over 700,000 copies in the U.S. alone. After recording various collaborations, ee returned in 2018 with “Testify,” and again in 2019 with “That’s What Love Can Do” and “When you Love Somebody”.

Contact us today to book Gary Barlow for your private party or wedding.